Paradise Point: A whole new rehabilitation facility in the heart of Phoenix 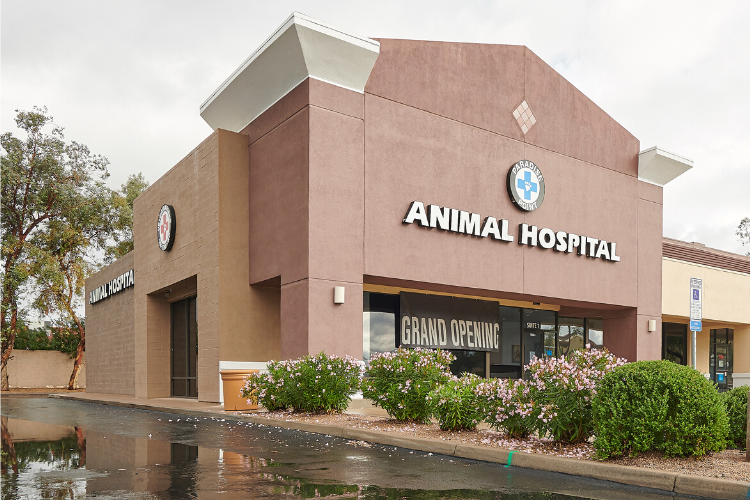 “I’ve known Dr. Garthe since three dogs ago,” said a client with her rat terrier/Catahoula mix in the lobby of Dr. Desiree Garthe’s new practice in Phoenix, Arizona. Long-term relationships are a common thread for her, her team, clients and partners from Patterson, who have known her and worked with her for a long time.

So when it came time to open her Paradise Point Animal Hospital, it’s no surprise that Dr. Garthe turned to her territory manager, Theresa Hurley, to start.

“I’ve known Dr. Garthe pretty much my entire career,” Hurley explained. “She was an associate at another practice that I called on for quite some time. The owner was going to sell to a corporation, and it wasn’t a good fit for her. So she reached out to me. In the meantime, she started a mobile practice to just keep her clients with her and familiar with her.”

The mobile practice helped Dr. Garthe keep in touch with her clients and patients.

“We went to lunch one day and decided it’s time. We put it together – a little plan, a little bit of financing – and we talked about what to do to differentiate her from the other practices in the area,” Hurley said. Hurley lives three blocks from Paradise Point and is familiar with all of the practices in the area.

“That’s when we decided to work with the laser therapy. She does Eastern–Western medicine too. So we did the laser and the treadmill – all things that we thought would be a good differentiator for her and her practice.”

No longer a dead end for her patients 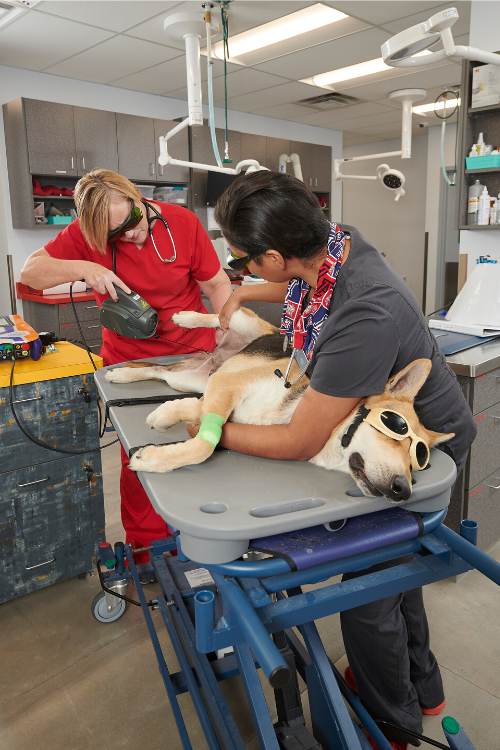 Garthe’s motivation to open her own practice and to showcase rehabilitation – right in the front window! – came from her love for her patients. “When I first started practicing medicine, I would come to dead-end cases. It’d be like: Oh no, there’s nothing more we can do. That just always bothered me; there’s got to be something more that we can do for those pets! I started exploring alternatives and I became certified in veterinary acupuncture. I’ve been doing acupuncture for over 15 years. It sets me apart from other facilities and it’s something I enjoy.”

“I love having other options to treat pets and help them get better and make them stronger,” she continued. “I knew that rehabilitation is in the forefront. It’s starting to take off. And why not? You know, we have physical therapists when we have injuries. That’s part of our protocol. Why isn’t it for them? And then for business purposes, too, I thought it was a good field to get into that would set me apart from other hospitals in the area. I don’t have grooming, so I needed another revenue source. That was also a reason I kept the On the Go practice.” 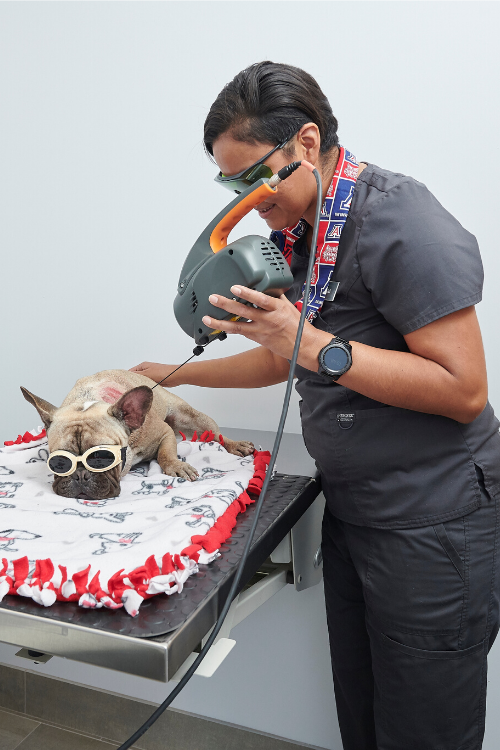 One of the key aspects of rehabilitative care for her patients is laser therapy. She chose the CE Laser for her practice. “We got the laser when we opened the practice. I use it for postsurgical incisions. I use it for wound care. I use it for arthritis, for muscles, strains and sprains.”

Garthe is certified in acupuncture and patients are accustomed to it. But it means they need to be able to sit still for 20 minutes or so for it to work. That’s where the CE Laser can help because Garthe can also use the CE Laser for acupuncture. “I still needle; if the dogs or the cats will tolerate needles, I needle them. I’ll probably use the laser on pets who I know won’t sit for needling. I’m sure for a lot of cats that will be beneficial because they don’t sit for 20 minutes with needles very calmly. Some do, most don’t. It just gives me another option.” 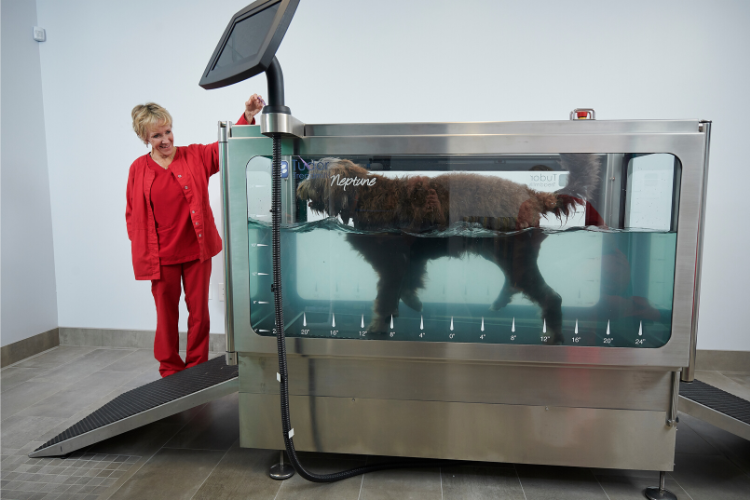 Garthe selected the Tudor Neptune Hydrotherapy Treadmill for her practice. There were a number of influences that led to her decision to offer hydrotherapy – but at first, her husband was not one of them. She knew she had two important considerations for Paradise Point. How can I set the bar on the standards of care higher? How I can differentiate myself within the veterinary community in the area that we’re in? were key questions that hydrotherapy provided answers to.

Garthe added, “My clients know who I am and how I’ve treated their pets for years, so they would expect that I would have some added modalities to help their pets.” But convincing her husband was the next step. Since he was her general contractor for Paradise Point, it was an important step. “My husband tried to talk me out of it. He thought having multiple exam rooms was better to begin with, then eventually adding it in. He finally saw the light after talking to him multiple times about it. He’s happy with the final product. But certainly, having it from the get-go was nice!”

What does hydrotherapy help? 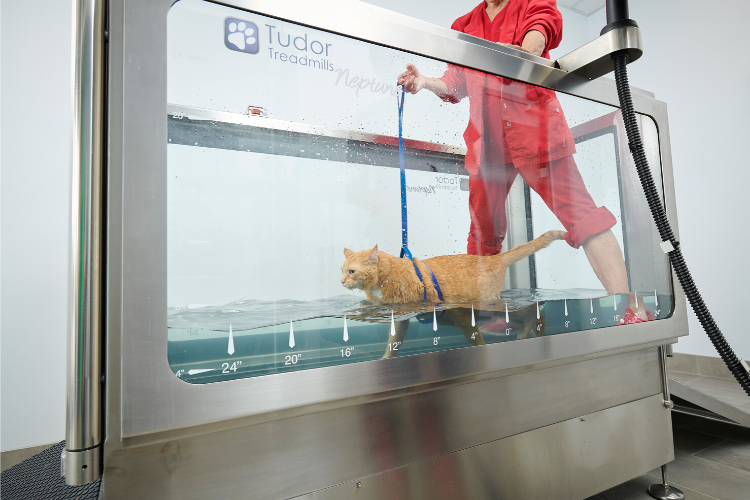 In her experience, Garthe has found that hydrotherapy helps with everything from arthritis to postsurgical recovery. “My patients use it to build or maintain muscle mass, intervertebral disc disease, various neuropathies, help with the offloading and placement of the paws correctly versus trying to do something on the ground. It’s that offloading of the weight, especially in neurological cases, that can really help them. Dogs who have had an anterior cruciate rupture – they have some pretty significant muscle atrophy so we can help them build muscle back.”

Garthe reflected on some patients she would be seeing that week. “I currently have an agility dog that also does dock diving. He’s a flat-coated retriever, very thin and well-muscled. So, we’re using it to try to help build better muscles in those hind legs.”

Garthe even had an overweight cat named Roger in the clinic during our visit. “We’re actually using the treadmill to see if we can get an obese cat kind of back to normal size.” Surprisingly, Roger the orange tabby did agree to walk on the treadmill with a little assistance from one of the vet techs. 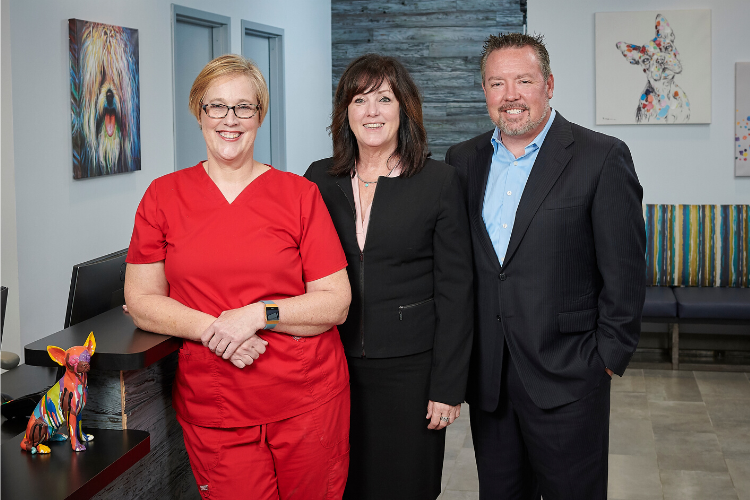 Paradise Point had been open about five months at the time of our visit. For Garthe, it felt like only two. Opening a practice can feel a lot like a wedding reception: it goes by fast and you barely remember it. But having her territory manager and equipment specialist by her side throughout made it possible.

For colleagues thinking of starting their own practice, Garthe said, “Just definitely talk to Patterson reps and hopefully you’ll build a relationship with them. I did with Adam and Theresa and they really know their stuff and really held my hand walking through this.”

Just like Roger the cat, everyone needs a little help and encouragement now and then. In fact, that’s what Patterson is all about.